Q. Paris-Memphis is the title of your second album, a follow-up to La ballade d’Anissa, but a departure in style. Why the change of focus? Is it a natural progression, or the desire for the albums not to be too-closely compared?

A. I think my debut EP “La ballade d’Anissa” was really a “sui generis” project. Its aim was not really to show my own style but to tell a romantic and dark lovestory through 3 songs. You don’t see my face on the cover, only a black tutu, a dance class atmosphere… Speaking of “La ballade d’Anissa”, many artists and singers as Diego Baeza, Vassilis Babaniaris (Greek rock star) and others said “The songs are a journey in vintage Paris and French cabarets”. Three songs (“La ballade d’Anissa”, “Alexandre”, “Vivement l’été”) have gained good reviews in Europe and Australia, the song “Vivement l’été” has been featured in a film, but I didn’t feel Myself when singing them on stage. I’ve been a dancer, I really like to dance while singing and finally “La ballade d’Anissa” was so quiet, so zen with long bridges! If I like romantic artists as The Cure or French singer Daniel Darc, my roots are in USA where I’ve spent the happier part of my youth in California. My fav sound is Chris Isaak’s one. I do like Nashville and Memphis, my mother was a folk singer in the early 70’s and my father is a big fan of Elvis. They took me to Graceland when I was 12… “Paris-Memphis” is about all the dreams I had when I was this little French teenager boring in Paris but spending her holidays in the USA! I was in hurry to take the plane every summer! Those dreams helped me to build myself and mould my character (I’m such a creative and free person). I couldn’t write about myself and my past without talking about them! “Paris-Memphis” is a tribute to road trips and American bluesy music. The album is partly folk and partly indie rock with a bluesy attitude and a very “Americana” soul, maybe it’s not so true… but with my French ears and my Parisian soul, that’s what I feel inside!


Q. What themes did you use to give Paris-Memphis its album unity?

A. The main theme is the travel. The second theme is the metamorphosis. The first track (Bêtes d’orage) was produced in a Parisian rock style, the second one sounds as Californian rock and is about Isadora Duncan’s tragic life. The dancer makes the link between France, where she lived and died, and the USA. And then all the other songs sound more and more Americana genre. The third theme is love, of course. When you are on the road for a long time, it transforms you! And you meet so many people… All those people teach you something with their lives, stories, heartbreaks.... That’s also the idea that gives the album its unity.

Q. Is there a stand-out track on Paris-Memphis for you, or did you aim for an even blend of music?

A. Yes, the stand-out track is really “Bêtes d’orage”. All the songs have been produced with real musicians (from Paris and Los Angeles), but “Bêtes d’orage” also has got an electro-mind. It’s very Parisian rock. The music video has been created in a humoristic spirit, what helped me to be guest in some funny TV shows as the famous JJDA show on French channel IDF1. The music vid is starring great French actor Jean Masini (who recently went viral with the John Lewis’ Christmas advert).

Q. Your studio albums being so different, did you choose to use a different range of backing instruments?

A. Yes, totally. “La ballade d’Anissa”, my debut EP has been totally produced with electronic music. As it was very dreamy and atmospheric music, it was not really a problem. I wanted to give a vintage and romantic touch and that’s what I did. But for “Paris-Memphis” it was another story! I wanted real musicians and traditional instruments as acoustic guitar, fiddles, autoharp, pedal steel… The music tracks have been recorded in California by musicians working in majors. The mix and the mastering have been made in Paris.

Q. Your career so far has spanned a number of disciplines. What is your primary focus? How do you see yourself?

A. Rhythm is my primary focus! You can find rhythm everywhere, in music, dance, books… I make music my priority but I’m not always focused on singing myself. I love to write songs for others singers too. When I’m in USA, I notice how complete professional artists are. Most of them can write, compose, sing, dance. I even know some singers that can make up themselves when are at a TV show… Here, in France, being complete sounds like a double-trouble! People don’t like it because they have the feeling that when you do everything, you can’t do anything well! What’s definitely false! Because the most you work in different artistic disciplines or spheres, the most you increase your inspiration and creativity. When you work in the artistic ground in France, you must be familiar with this question: 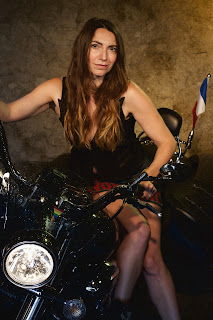 “And, do you have a real job?”… No comment! I work in arts since my younger age. I’ve been dancing for contemporary companies, I’ve been a dance and a butoh teacher, then I wrote my own books and built a gesture method and worked for many magazines as a journalist and, finally, I came to the music by writing for other singers. When I was 15, I’ve been a model for a while and an actor… Finally, at 40, I realise I’ve spent 25 years winning my money with these different arts. Excepting shootings all those arts have one thing in common: the pen! To me writing a song, a music, a choreography or a book is, before all, a pen affair! I see all these disciplines (writing songs, articles or books, composing a music, creating a choreography…) as a same movement of life, an ongoing, unbroken movement. I write the lyrics, the music, the video’s scenario, I’m also able to create myself the cover and sometimes the flyers for my concerts when small events. It’s a set, an Everything.


Promote Me Please blog is associated with Affordable Manuscript Assessments
It is open to anyone with a family-friendly creative endeavour to promote. Comments are welcome. To read other interviews at Promote Me Please, choose from the menu on the right of this post.

The direct url for this interview is http://tinyurl.com/promoCeline