Today we welcome Pauline Hosking to Promote Me Please to talk about her new book Cinnamon Stevens - Crime Buster. 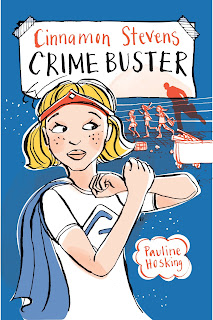 Q. Cinnamon Stevens – Crime Buster is an enticing title.  Please give us a 25 word (or fewer) pitch for the story.

A.  Twelve year old Cinnamon dreams of being a super sleuth. Her chance comes when a class mate disappears during a school camp.

Q.    What’s the story behind Cinnamon’s name? Is the in-story reason different from the author-choice reason?

A. In an English class years ago I taught a girl called Cinnamon. It’s such a great name it stayed with me (along with Tamsin, Demelza and a few others I haven’t used yet). Another reason for the name is that Cinnamon’s family (in the book) are foodies. Her father is a police sergeant and her mother’s a civil celebrant but their hobby is cooking. Cinnamon believes a good breakfast is the best start to a day. Some of her breakfast recipes appear on my website www.paulinehosking.com  Cinnamon’s name is also the source of a running joke. A boy tries to get her attention by calling her ‘Spice Girl’ and ‘Oregano’ and ‘Paprika’. Cinnamon mistakes this as an attempt to annoy her. It won’t be the last time she misses or misreads a vital clue.

Q.     Does Cinnamon have a sidekick? If so, how did you decide who/what to choose?

A.  The book begins with Cinnamon afraid she will be friendless in secondary school because her BFF, Cosette, has gone to study acting at the (imaginary) Academy of Performing Arts in Melbourne. To her surprise Cinnamon finds a second best friend in Meera Kyrzwicki, the rather eccentric brainiac of Year 7, who, she discovers, is an expert at reading body-language. Cinnamon, Cosette and Meera form an impressive triumvirate. They hunt for the missing girl, following the example of the penguins of Phillip Island (scene of the ill-fated school camp, see Question 1): ‘When danger looms remember the penguins. Don’t give up and stick together!’

Q.     What are five words that describe Cinnamon’s personality?

A.  Cinnamon stands on the anxious brink of adolescence. She is a funny, stead-fast, friend - who is often wrong-footed. Although nervous when faced with small problems, she discovers that under pressure she has a core of solid steel. If I have to use five words to describe Cinnamon they would be: anxious, adolescent, funny, determined, courageous. Kat Chadwick’s illustrations and book cover totally capture the spirit of Cinnamon and her feisty friends.

Q.     What’s next for Pauline Hosking? Is there a new Cinnamon Stevens story in the works?

A. I’ve written most of the first draft of Cinnamon’s next adventure, provisionally titled Dead Scared. It concerns the play Macbeth, a graveyard, the haunted (actual) goldmining town of Walhalla in Victoria’s Gippsland, and the ghost of an actress who died in 1910.

Thanks Pauline!
You can find out more by visiting Pauline at

The paperback is available from www.dennisjones.com.au, The Book Depository and Booktopia, and the kindle edition is on Amazon.

The second book in this series, Cinnamon Stevens Ghost Light, also features in this blog at https://tinyurl.com/cinnamonstevens2

Promote Me Please blog is associated with Affordable Manuscript Assessments

It is open to anyone with a family-friendly creative endeavour to promote. Comments are welcome. To read other interviews at Promote Me Please, choose from the menu on the right of this post.
Posted by Flora at 20:02